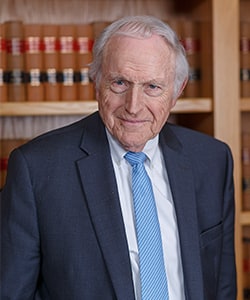 Herbert S. Cohen is the founder and principal of the Cohen Law Group. With over 65 years of legal experience, Attorney Cohen has represented countless clients in relatively all areas of the law both domestic and abroad. His dilligent approach coupled with his engaging demeanor has served his clients well over his many years of practice. Attorney Cohen’s success and legal prowess have caused him to be well-established in Boston’s legal community.

Attorney Cohen focuses his practice on business formations, business litigation, real estate law, and domestic and international civil litigation and arbitration. His trial experience is extensive having sucessfully tried numerous cases in Massachusetts and other jurisdictions throughout the world.

He has served as a Lecturer for Mayor’s Housing Task Force, Newark New Jersey, and Boston Building Trade Council “Construction Industry Start Ups”. Attorney Cohen was General Counsel for Freedom House, Inc. for over 20 years and helped establish Boston’s International High School. He was a member of a Board of Directors sponsored by the Harvard University John F. Kennedy School of Government Institute for Social and Economic Policy in the Middle East. Attorney Cohen served as the Chairman of the Umpires at the Head of the Charles Regatta for several years.